History of the Town


On the 12th day of April 1753, by act of the General Court, Groton West Parish, upon petition by its inhabitants, was made a district, and named Pepperell, in honor of Sir William Pepperell, the hero of the memorable capture of Louisbourg, in 1745. Reverend Mr. Emerson, who had been a chaplain in that expedition, probably suggested the name of his old commander as appropriate for the new district. Sir William acknowldged the compliment by the customary present of a bell, which, however, was never received by those for whom it was intended. Sir William always spelled his name with two "r"s, and for many years the name of the town was so spelled.

Pepperell began with settlements from Groton on scattered farms and at river crossings on the Nashua and Nissitissit Rivers in the 1720s and 1730s, although the Proprietors of Groton had granted land in what is now Pepperell along the Nashua River beginning in the 1680s. The community was given separate identity as Groton West Parish in 1742, with its boundaries described in the petition for the new community. It became a district in 1753 and a town in 1775.

Pepperell has a rich colonial history from those early years and was very active in the independence movement sweeping the colonies. Several Pepperell men went to the Old North Bridge in Concord on the morning of April 19, 1775. Pepperell women, led by the irrepressible Prudence Wright, guarded Pepperell's covered bridge and captured a British spy. Colonel William Prescott (his residence is pictured above right) was the commander at the Battle of Bunker Hill and, while attributions vary, is often credited with the famous command, "Don't fire until you see the whites of their eyes." Pepperell's Bunker Hill Memorial commemorates the many men from Pepperell who fought along side Prescott at Bunker Hill.
Review the following written entries in town meeting archives from the 1770s during the early years of the formation of Pepperell and the country:


While the town center began as a religious and governmental center, the eastern portion spread out from paper and shoe factories along the Nashua River, beginning there in the 1830s and reaching the Rotary by about 1900. This development and the building of the Worcester and Nashua Railroad in 1848 led to the expansion of the town in 1857 to include former Groton land to the east of the Nashua River.

A paper mill was established at Main Street and the Nashua River by And Emerson, grandson of Reverend Joseph Emerson in 1834 or 1835. Under his ownership and then that of H. M. Clark, the S. D. Warren Company, and the Fairchild Paper Company, the mill expanded considerably. The shoe industry began with small shops or "ten footers" in the 1830s. Then Albert Leighton and his sons expanded the size of the industry with the three shoe factories, each larger than the last, they built in 1868, 1879, and 1890. Employment in these factories rose from 70 in the first to 700 in the last. Their construction marked the climax of Pepperell's growth until the post-World War II years. 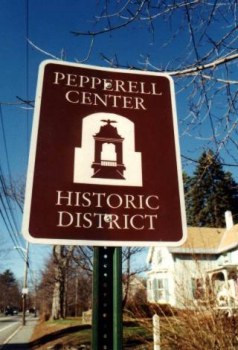 The Pepperell Center Historic District was added to the National Register of Historic Places by the U.S. Department of the Interior in 1994. This came about following several years of effort by the Historical Commission, beginning with an application to the Massachusetts Historical Commission.

The district encompasses the area immediately surrounding the Pepperell Town Hall, and includes both historic houses, mostly from the nineteenth century, and a number of important public building including the Lawrence Library, the Community Church, and the Prescott Grange, as well as the town's oldest cemetery and war monuments.

Unlike local historic districts, national register districts such as this do not subject owners to any restrictions on the use of their property, and buildings may be modified or even demolished without regard to historic importance. 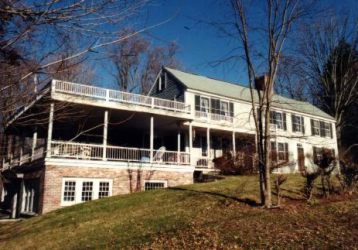