News of the beginning of the American Revolution

District Clerk, Nehemiah Hobart, wrote the following entries into the records of the District of Pepperell upon receiving news of the Battles of Lexington and Concord and Bunker Hill that started the Revolutionary War. 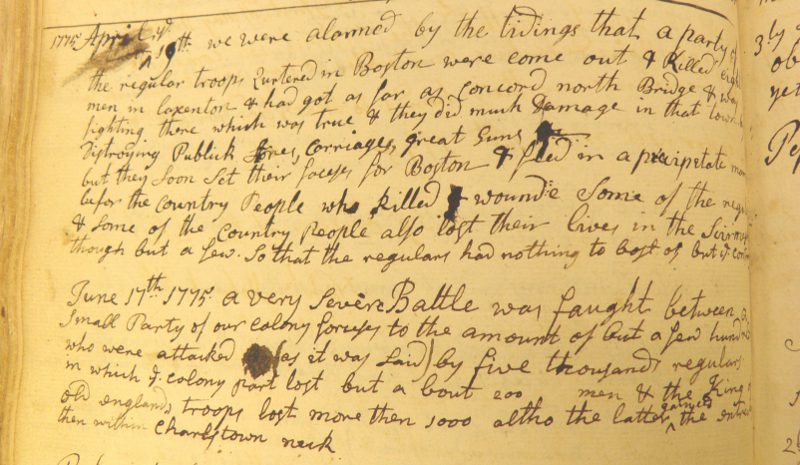 "1775 April 19th.
We were alarmed by the tidings that a party of the regular troops quartered in Boston were come out & killed eight men in Lexington & had got as far as Concord North Bridge & was fighting there which was true & they did much damage in that town by destroying the Publick stores, carriages, great sums but they soon set their forces for Boston & fled in a precipitate manner before the country people who killed & wounded some of the regulars & some of the country people also lost their lives in the skirmish though but a few so that the regulars had nothing to boast of but the contrary."

"June 17th 1775
A very severe battle was fought between a small party of our colony forces to the amount of but a few hundred who were attacked (as it was said) by five thousand regulars in which the colony post lost but about 200 men & the King of Old England's troops lost more than 1000 altho the latter gained the entrench then within Charlestown neck."