During the Coronavirus pandemic, the DPW office is closed to the public. In person visits may be scheduled in advance by calling 978-433-0359. Please choose option 2 for the Sewer Department. If no one is available to take your call, please leave a message and we will get back to you as soon as we can.

On August 22, 2019, the Pepperell Board of Public Works adopted new fees for connections to the municipal sewer system. These fees can be found here . These new connection fees supersede the Sewer Benefit Assessment as shown in Article III of the “Town of Pepperell Regulation for Wastewater System Costs (effective May 28, 1996)”

Notice to Water and Sewer Customers - Effective August 2015
In an effort to more efficiently process payments, we have changed our remit to address for all Water & Sewer payments. Please include your account number on all payments and mail to:
Town of Pepperell - DPW
P.O. Box 319
Pepperell, MA 01463

Payments may still be made in person at Town Hall Monday through Thursday.

The Town of Pepperell Sewer Division is responsible for operating and maintaining a Grade 6 wastewater treatment facility serving the towns of Pepperell and Groton.  The Pepperell Wastewater Treatment Plant (WWTP) is an extended aeration type of facility that includes physical, chemical and biological treatment processes.  The collection system consists of 35 miles of sewer in Pepperell and 26 miles of sewer in Groton.  1.13 million gallons per day can be treated at the Water Pollution Control Facility (Wastewater Treatment Plant) and discharged to the Nashua River.  The WWTP is located off Rte.111 in the rear of Lomar Park.

Pepperell’s facility operates under a National Pollution Discharge Elimination System (NPDES) permit that is issued by the US EPA and renewed every 5 years.  The Department of Environmental Protection (DEP) and the US Environmental Protection Agency (EPA) require over 420 analytical reports annually to ensure the facility meets the current effluent discharge requirements.  Thousands of readings and laboratory experiments are conducted throughout the year to maintain this compliance.  The Sewer Division Laboratory consistently meets the Environmental Protection Agency’s Quality Assurance / Quality Control requirements.  The Sewer Divisions six licensed operators perform regular routine inspections of the plant and eight pumping stations.  Seasonal inspections and monitoring of the collection system and its infrastructure is an ongoing process.  Inspections are performed utilizing the National Association of Sewer Service Companies (NASSCO) Pipeline Assessment and Certification Program (PACP) guidelines.  Licensed operators are on call 24 hours, 365 days a year. 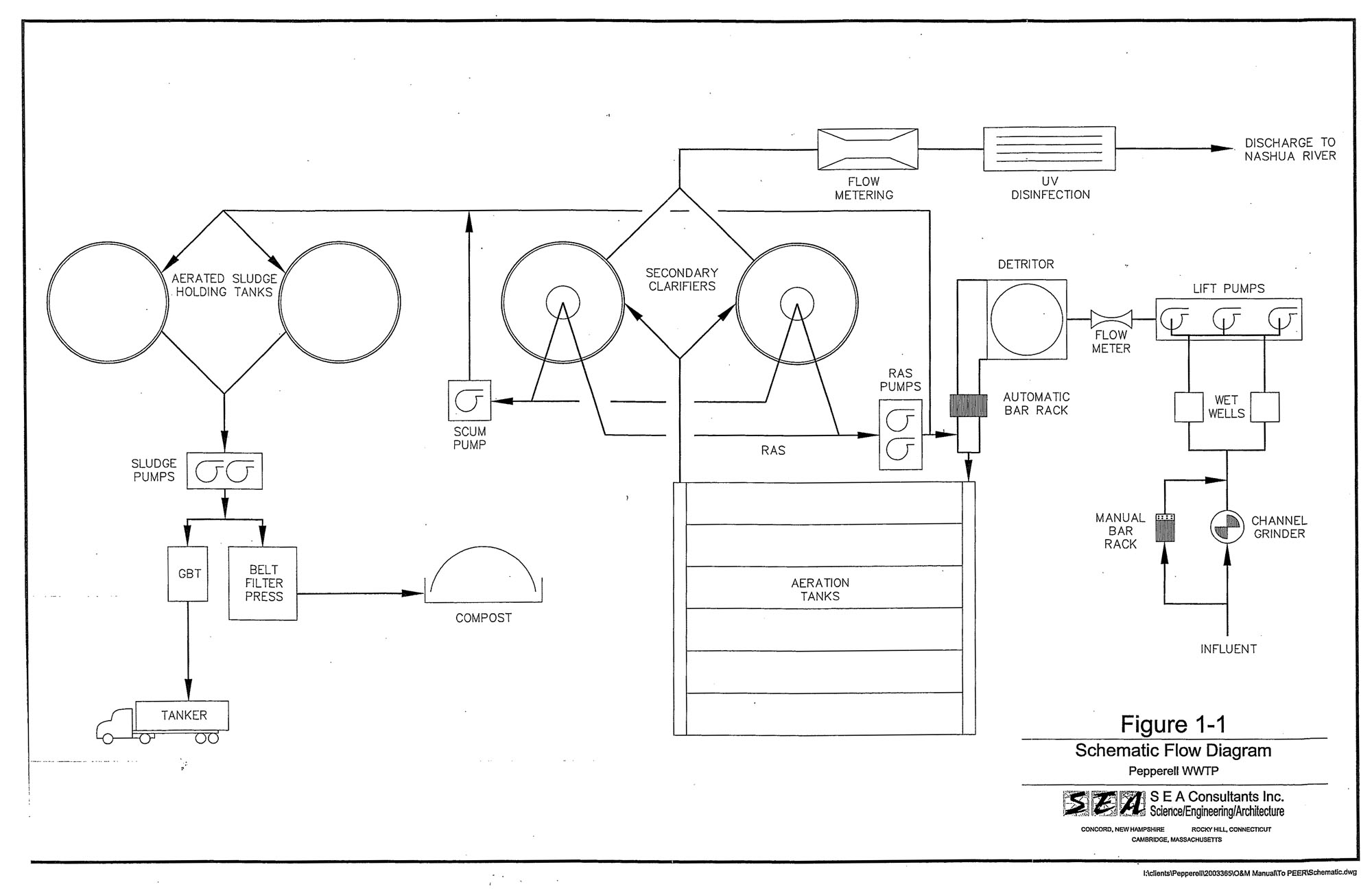 The collection system transports the wastewater from individual homes and buildings to the treatment plant.  The collection systems consist of 11,600 linear feet of interceptor sewer, 13,900 linear feet of lateral sewer, 800 manholes, three siphons (Shawnee Rd., Lowell St. and Broadmeadow) and two river crossings.  Wastewater flows by gravity to the WWTP via a 24” inch PVC line.  Raw sewage flows through a grinder to reduce the solids to approximately ¼” inch size.  The septage is dumped slowly just upstream of the grit removal system.  The wastewater flows into two separate wet wells, which can be combined by opening a slide gate between them if needed.  From the wet wells, it is pumped through a flow meter and into the grit removal structure by one of three pumps.  In the grit removal facility the inorganics such as sand, stones, etc. settle out.  The settled inorganic material is collected and pumped to a dewatering mechanism where inorganic solid materials are separated from organic liquid materials.  The liquid wastewater is returned to the influent channel of the grit removal structure.

The wastewater from the grit removal structure flows through an automatic bar screen to the aeration tanks.  In the aeration tanks, the wastewater is aerated and mixed with return sludge from the clarifiers to form a mixed liquor.  Organic material in the incoming raw sewerage is absorbed by the activated sludge particles to form small flocs (loosely aggregated particles) in the mixed liquor.  The wastewater is retained in the tanks for 24 hours at the design flow rate.  The mixed liquor then flows into the two secondary clarifiers.  By reducing the velocity of the incoming mixed liquor in the influent well of the clarifier, the solids are settled to the bottom of the clarifier.  The clarified liquid over flows the weir located in the effluent channel of the clarifiers.
The clarified liquid then flows through the flow meter, where effluent flow is transmitted continuously to the SCADA (Supervisory Control and Data Acquisition) system in the control room.  Flow then travels into the UV disinfection system by gravity.  Disinfection of treatment plant effluent is accomplished by an ultraviolet light disinfection system.  The energy radiated by the UV lamps is absorbed by microorganisms in the treated wastewater, rendering them sterile and unable to survive.  The system consists of three parallel UV reactors.  Each reactor contains four UV modules each containing six UV lamps.  The disinfected effluent is finally discharged to the Nashua River.