The proposed Pepperell Center Register District is surrounded on the north, west, and south by less densely settled areas, including much open space that until recently was farmland. Toward the west, the surrounding terrain is hilly, while the easterly parts of the District and its surroundings are more low-lying. It is bounded on the east by the industrial village of East Pepperell.

The district contains 72 structures on 154 acres of generally level land on the streets that radiate from the site of the original meeting house. The district is relatively intact, containing 21 intrusions, all built after the period of significance (ca. 1760-1920).

The first significant public building in this district was the original Meeting House, constructed in 1745 and replaced in 1770. With the meeting house as a focus, other public functions came to be located in this area. In the same vicinity many of the town's ministers, doctors, and lawyers lived and conducted their professions from the eighteenth century to the present. Taverns and shops were built to serve both local trade and for a time, stage coach passengers. In the early nineteenth century shoemakers set up shop in the vicinity. Such activities provided the impetus for homebuilding along the streets--Main, Park, Heald, Townsend, Elm--that radiate out from the Common, Today the basic character of the district is residential, along with a significant number of public and institutional buildings, including town hall, the Lawrence Library, and the Community Church.

Pepperell Center developed along the five streets that radiate from the site of the first Meeting House: Main, Park, Heald, Townsend, and Elm. Nearly all structures are set squarely facing the street. Set backs range from a few buildings on Townsend Street without any significant front yards to houses on Park and Main Streets set back 50 feet or more. There is open space in the very center of the district (the site of the old Meeting House, vacant since 1917), the two town cemeteries, and on the edges of the district along Park and Elm Streets. Main Street and Park Street are lined with mature trees, the sugar maples along Main Street being particularly impressive in the fall.

Within the proposed resister district buildings representing the Federal, Greek Revival, Italianate, Gothic Revival, Queen Anne, Stick Style, Shingle, and Colonial Revival are all present in relatively pure forms as well as in vernacular versions. Nearly all buildings are built of wood; the brick and stone Lawrence Library is the most notable exception. Except for the Community Church and Town Hall, all buildings are 1 to 2-1/2 stories in height. Design quality ranges from the vernacular to quality examples of major architectural styles (apart from the Lawrence Library, few buildings were the work of professional architects).

The significant concentration of well-preserved homes of Pepperell's nineteenth-century elite and several of the town's most important public buildings make this neighborhood unique in the town.

As befitting a neighborhood that has long housed some of Pepperell's wealthiest and most distinguished citizens, the buildings of the district are generally in good condition. Nearly all have escaped the application of synthetic siding that mars so many old Pepperell houses, and several have been lovingly restored. 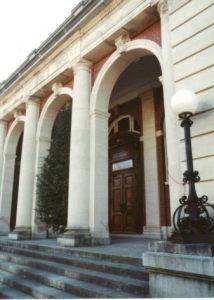 The various public and institutional buildings help define this as the town center. Town Hall, 1 Main Street (1874), built in a Wooden Gothic style, is Pepperell's first and only town hall (town meetings were previously held in the Unitarian Church). The Charles S. Lawrence Library, 15 Main Street (1900) was designed and erected by Ernest Flagg and W.B. Chambers. In his will of 1897, Charles Farrar Lawrence bequeathed $100,000 to the Town of Pepperell for the construction of a library and art gallery. Built in a transitional style of Romanesque and modern French architecture, in its day it was the most expensive and finely constructed building in Pepperell. The Community Church, 1 Townsend Street (1860), constructed in the fashion of many New England churches with a broad gable roof, long, narrow windows with simple wood frames and a front entrance tower which rises and tapers to a point. Interior features include tin ceilings in the basement. 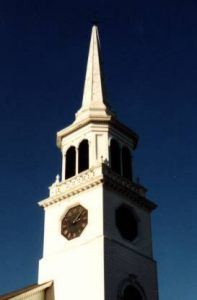 Adjacent to the Town Hall and Church is the Pepperell Common, Park & Main Streets. Religious, municipal, and military activities all occurred here. Beneath shady trees is the Bunker Hill Monument (1899). On the southwest corner is the Liberty Flagpole (1920). The Unitarian Church (built 1836), which was located on the northwest corner of the Common, burned in 1917, but its foundation is visible. To the north on Park Street are the Walton Cemetery (1746) and the Corporation Cemetery (1901). The Walton Cemetery was first donated to the parish in 1746. Its oldest stone dates from 1750. Many of Pepperell's important early settlers are buried here including minister Joseph Emerson and Col. William Prescott of Bunker Hill fame. This cemetery, like its neighbor the Corporation Cemetery, is in a park-like setting surrounded by a granite and copper fence. The Corporation Cemetery was formed in 1901 when the Walton Cemetery began to run out of space. Many late 19th century family plots, including some with fine stones, were incorporated into this cemetery.

Other public structures in the district include District School No. 1, 1-3 Park Street (1831), a brick one-room school house that later served as a fire station, and then a meeting place for the local chapter of the Daughters of the American Revolution; The Pepperell Academy Building, 12 Park Street (1834), a fine example of vernacular Greek Revival architecture; Center Primary/Center Grammar School, 22 Townsend Street (1891), a two-room school building, now a private residence; and the Pepperell Pound, Heald Street (perhaps as early as 1750, erected here 1850s, restored 1930 and 1985), a reconstruction of the town's ancient animal stockade 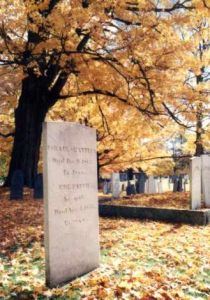 Many of the town's ministers, doctors, and lawyers lived and conducted their professions from the eighteenth century to the present in Pepperell Center. Many of the properties on which their homes were built were developed by the division of town land grants to the first ministers--Joseph Emerson and John Bullard. Probably the first of the homes was that of Emerson himself, still standing on Main Street as the ell of a larger house built later. This house, the Nathan Shipley House, 10 Main Street (1749) was built in sections. The original ell, a one story gable roofed structure, was constructed in 1749. The front, a central chimney Colonial was added in the later 1700's. The Shipley family added the side, wings, and gable front section. 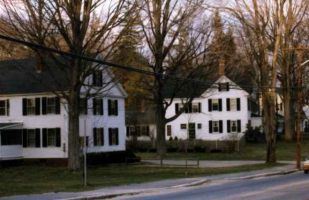 Two of the most imposing residences in the district were built early in the nineteenth century. The Joseph Breck Homestead, 6 Park Street (1817) was built in the style of the Federal Period and has had many changes over the years, but is now restored to its original condition. Benjamin Cumings of Hollis, N.H., built the house for Joseph Breck on land purchased from the Rev. John Bullard, pastor of the First Parish Church. The Lewis Estate, 3 Elm Street (1819; original house mostly destroyed through remodeling, 1998) is another high-style Federal home. Its hip roof has two rear chimneys, columned corners, and a five-bay facade. The door, with its fanlight, pilasters and entablature as part of the surround, is a good example of a Federal entrance.

Relatively little new construction has occurred in the district in the past 50 years. Newer intrusions have almost always been built on a vacant land rather than replacing existing structures. Since 1974 the district has been zoned exclusively for single-family residential use and a minimum lot size of 40,000 square feet and 150 feet of frontage (increased to 80,000 feet in 1984). Most new construction has consisted of individual one to two story single family residences, clad in wooden clapboard, not dissimilar to existing structures. Two cluster subdivisions were built in the 1980s on the edges of the district, but both are set back enough from the district to cause a minimal effect on the basic character of the area.

Because much of the district has been occupied continuously for nearly two centuries there may well be potentially valuable archaeological sites. Because written records from early Pepperell are sparser than in some other communities, archaeological investigation might shed light on early undocumented commercial uses and public buildings. Such features as privies, trash deposits, building foundations, and evidence of agricultural patterns could help expand our knowledge of late eighteenth and nineteenth century rural town life. Since much of the land in the district has been relatively undisturbed, significant archaeological evidence may exist here.

Significance of the District

The proposed National Register District forms the heart of Pepperell, both historically and at the present time. It forms a well-preserved entity containing the town's public facilities and residences around them. In the area are examples of all styles of nineteenth-century New England architecture, from the Federal to the Colonial Revival. National significance is conferred by the presence of the grave of William Prescott, commander at Bunker Hill, and the Lawrence Library, designed by a nationally prominent architect.

History of the District

Pepperell's identity as a separate parish entitled the inhabitants to their own meeting house, but a vigorous debate broke out over its location between residents of the western hills and the area near the covered bridge (according to tradition, Shattucks and Bloods, respectively). It was only with the aid of the Massachusetts legislature that the two factions were able to compromise and place the community's first meeting house at the intersection of Park and Main Streets, which is a high point in relation to surrounding territory. This church and its successor stood on the site until destroyed by fire in 1917, with only the foundations still visible on the grass of the Common.

With the meeting house as a focus, other public functions came to be located in this area. First of these was the cemetery with its monuments to the town's first minister, Joseph Emerson, and Bunker Hill commander William Prescott. Then came district school #1 in 1831, a second church when the town split between Unitarians and Congregationalists in the 1830's and the Town Hall in 1874. The Common was the site of parades by the local militia, the Prescott Guards, in the early nineteenth century and provided the location for monuments--DAR Flagpole, Bunker Hill Memorial, Veterans' Monument. Within a few steps of the Common the Pepperell Academy (1834, now Prescott Grange Hall) and the Lawrence Library provided for other public functions.

In the same location many of the town's ministers, doctors, and lawyers lived and conducted their professions from the eighteenth century to the present. Taverns and shops were built to serve both local trade and for a time, stage coach passengers. In the early nineteenth century shoemakers set up shop in the vicinity. Such activities provided the impetus for homebuilding along the streets--Main, Park, Heald, Townsend, Elm--that radiate out from the Common. Many of the properties on which these homes were built were developed by the division of town land grants to the first ministers--Joseph Emerson and John Bullard. Probably the first of the homes was that of Emerson himself, still standing on Main Street as the ell of a larger house built later. Other important residences in this part of the District are the Joseph Breck home on Park Street and the Lewis Estate. In addition to these two Federal style structures, Greek Revival, Italianate, Gothic Revival, Queen Anne, Stick Style, Shingle and Colonial Revival are all present in the district in relatively pure forms as well as in vernacular versions.

The fact that railroad construction in 1848 bypassed the town center kept it from becoming heavily commercial or industrial. The stagnation of the New England farming economy and the collapse of the Pepperell shoe industry at the end of the nineteenth century left the town with paper production as its only substantial economic resource. Population and building stagnated from 1900 until after World War II.